With this background, the biological mother filed an application under the Code of Criminal Procedure for the custody of the child in the Sessions Court. The Sessions Court transferred her custody to the mother two weeks after the birth of the child. The child is now is now eight years old and her legal status is still in limbo.

The alleged Biological Father of the child, Farooq Siddique, then moved to the Rawalpindi Bench of the Lahore High Court on appeal and presented the surrogacy agreement to the Court to assert his claim over the child. The High Court hearing a case on surrogacy for the first time, said that there was no law on surrogacy in Pakistan. The court further stated that even if there is a law that allowed surrogacy in Pakistan, there is no material evidence to prove that the Siddique is the biological father of the child. Siddiqui had alleged that Naheed and her relatives had tried blackmailing him for more money while she was pregnant. Contrastingly, the court also did not accept the fact that the marriage took place between the biological mother and Farooq Siddique as the biological mother could not prove her marriage to him in a satisfactory manner.

The court stated that the custody of the child should rest with the biological mother Naheed and that her poverty should not stand in her way for exercising parental rights over her child. Further, since there is no special legislation on surrogacy existing in Pakistan, the Court had no legal material to accept or reject the prayer of the biological mother and decided the case as in the case of a normal petition for custodial rights.

Question 21 of the RTI Application related to the number of Exit VISA stamping done for cases of surrogacy. The Ministry of Home Affairs had transferred the particular question to the all the State Governments, Union Territories and the Foreigners Regional Registration Officers (FRROs).

Indian Embassy in Beijing replies to RTI on Surrogacy Visa

I had written to the Indian Embassy in Beijing, China seeking information under the Right to Information Act, 2005 over the notification published by the Indian Embassy in their website (http://www.indianembassy.org.cn/DynamicContent.aspx?MenuId=59&SubMenuId=91). The material published in the website is with regard to the new Surrogacy Visa introduced by the Ministry of Home Affairs.

The following are the contents that have been published:

I had received a reply on the 25th July 2012 providing answer to my reply. The following is the relevant extract from the reply received from the Indian Embassy:

a)    Document to substantiate that the couple commissioning surrogacy are married for more than two years.

b)   Letter from the concerned embassy stating that their law recognizes surrogacy and that the child born to the couple through the Indian surrogate mother will be permitted entry into their country as biological child of the commissioning parents.

c)    Undertaking from the couple that they would take care of the child.

d)   Copy of agreement between surrogate mother and the commissioning couple.

e)    Letter from one of the ART Clinics recognized by ICMR, where treatment is to be done. 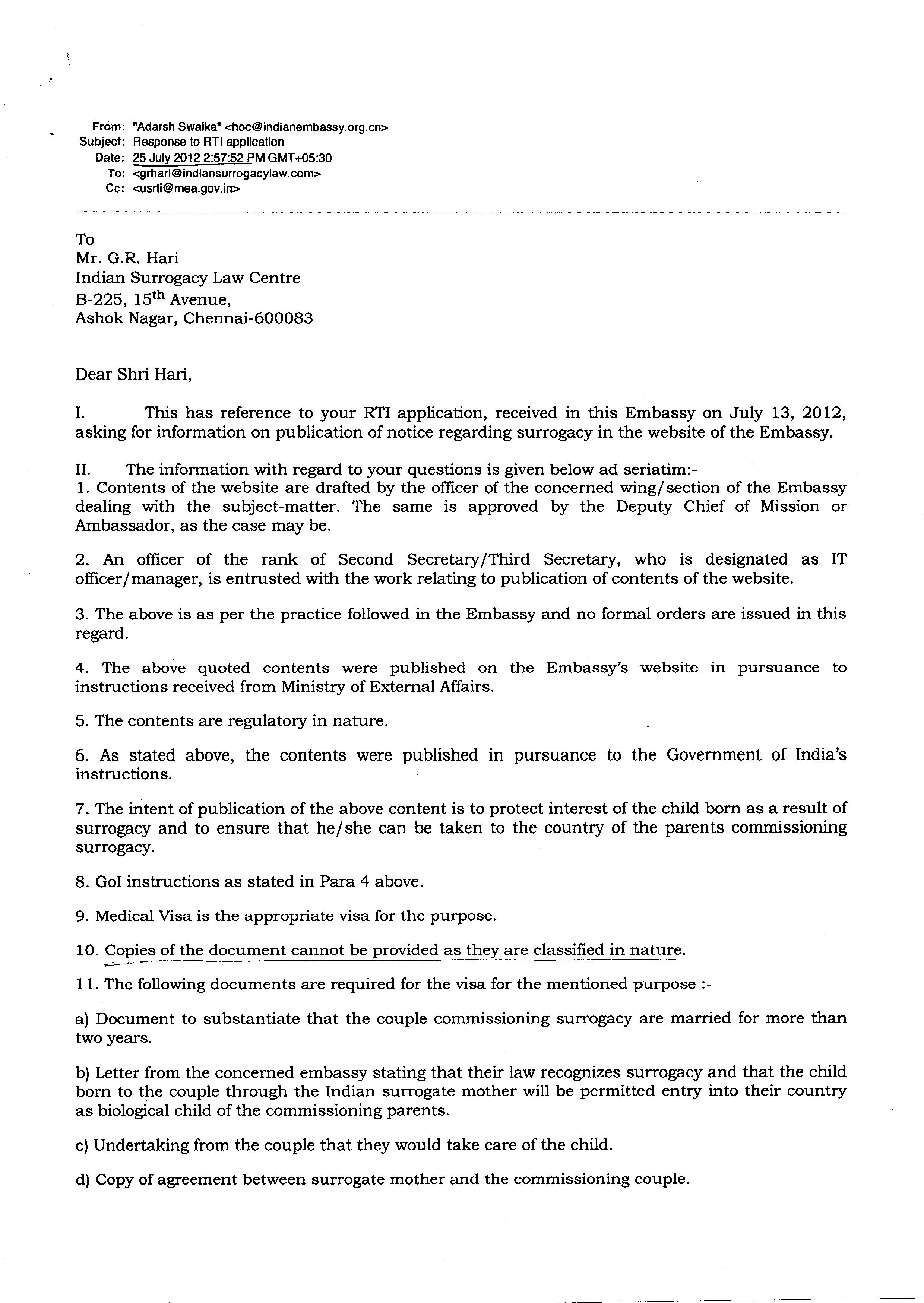 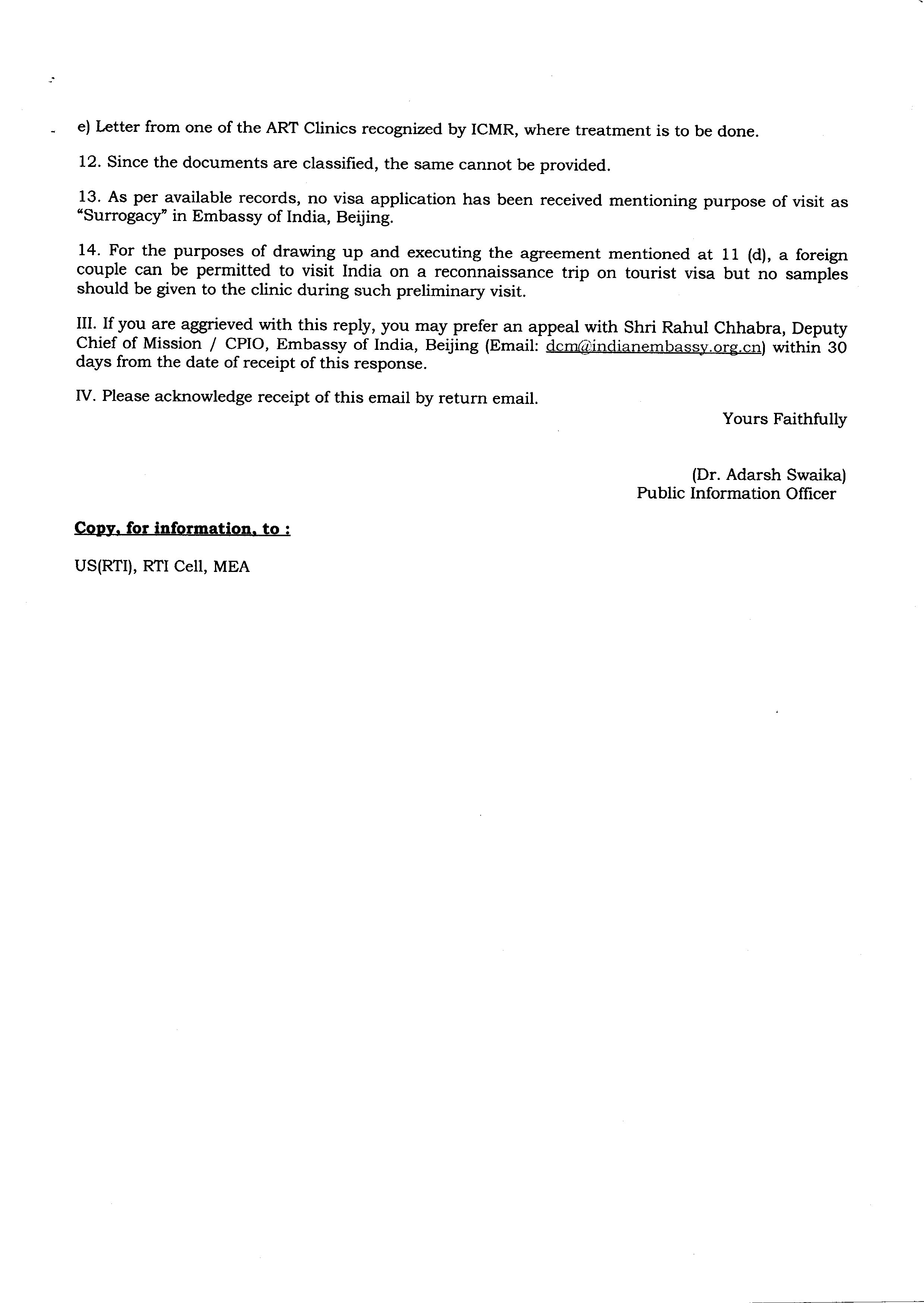 Few of my colleagues at the American Bar Association had expressed concern over the changing circumstances for surrogacy in India. The Indian Embassies in various countries have published the following notification stating that there is a special category of visa called the “Surrogacy VISA.” However, there is no clarity from the embassy as to what are the requirements for obtaining the new VISA. The basis on which the new VISA category has come into force is a matter of question as there is no special legislation on surrogacy in India.

INSTRUCTIONS FOR VISA FOR SURROGACY ARRANGMENTS

This is to bring to notice that any person seeking a visa to India for the purpose of entering into a surrogacy arrangement must ascertain beforehand whether the law of his/her country permits surrogacy and will provide appropriate travel documents to the child for accompanying the surrogate parents. Entering into surrogacy arrangement under any other visa not sought for surrogacy is punishable under the Indian law.

Further, this notification left commissioning couple perplexed as to what are the requirements to be fulfilled to take up surrogacy in India. Without proper information from the Indian Embassies, several intended parents have been unable to satisfy the authorities on the documentation for obtaining the new surrogacy VISA. Many Indian Embassies also required specific letter from the Government which states that surrogacy is recognised in their country and that the country would allow the child born through surrogacy back into their nation. This proves challenging as no Government would provide such a letter at a preliminary stage and grant of citizenship for children born abroad allows depends on the circumstance surrounding the birth.

I had taken the initiative to investigate over this matter and sought clarity over the regulations based on which such notifications have been issued. As part of the initiative, I wrote to  Ministry of External Affairs and various embassies that have published such Notification as the above.

The questions posed to the Ministry of External Affairs are as follows:

I await to hear from the Ministry of External Affairs and the Embassies on this drive to obtain information on international commercial surrogacy in India.
10Apr 2011

This is the update pertaining to the French case of Dominique Mennessan and Sylvie. The earlier post on the decision of the Court of Appeals is here.

The Supreme Court of France, which is the highest judicial forum in France, (Court of Cassata) had turned down the application by the couple for inclusion of the names of their twin daughters in the French registry. The twins were born ten years ago through surrogacy in the month of October 2000.  Isa and Leah have a birth certificate indicating that American parents are Menesson, but the French Government challenged transcription of these documents. The couple is fighting, since the birth of twins, for that French law recognizes their parentage.

The couple has been struggling for 10 years with the legal procedures for including the names of twin children in the French registry.  The Court of Appeal, too, had not recognised the children to be French citizens. The children were born to an American surrogate mother, Mary.  She gave birth to Isa and Leah from the embryos created from sperm from Dominique and the egg from a friend.

France does not allow surrogacy, practice to be carried by another woman, for a fee, an embryo conceived in vitro. In this case, the embryo has been conceived with sperm from the joint French, Dominique Menesson, and the oocyte from a friend of the couple. Dominique, the husband, however retains a recognition of parentage of their child through official documents issued in the United States.On the birth of the twin children, their birth certificates were prepared in accordance with the Californian Law.  The couple have been considered to be the legal parents as per the United States authorities, but not by the French authorities.