In a sudden move, the Government of India represented to the Supreme Court that the Government is not support of surrogacy for foreigners and looks for banning the same. The Government of India, in a hurried move, released information to the Press that it looks for disallowing commercial surrogacy for foreign nationals on late evening prior to the hearing. Also, the Indian Council for Medical Research sent out the following notification to all ART Clinics requesting them not the “entertain” foreign nationals for surrogacy. The communication is found below: 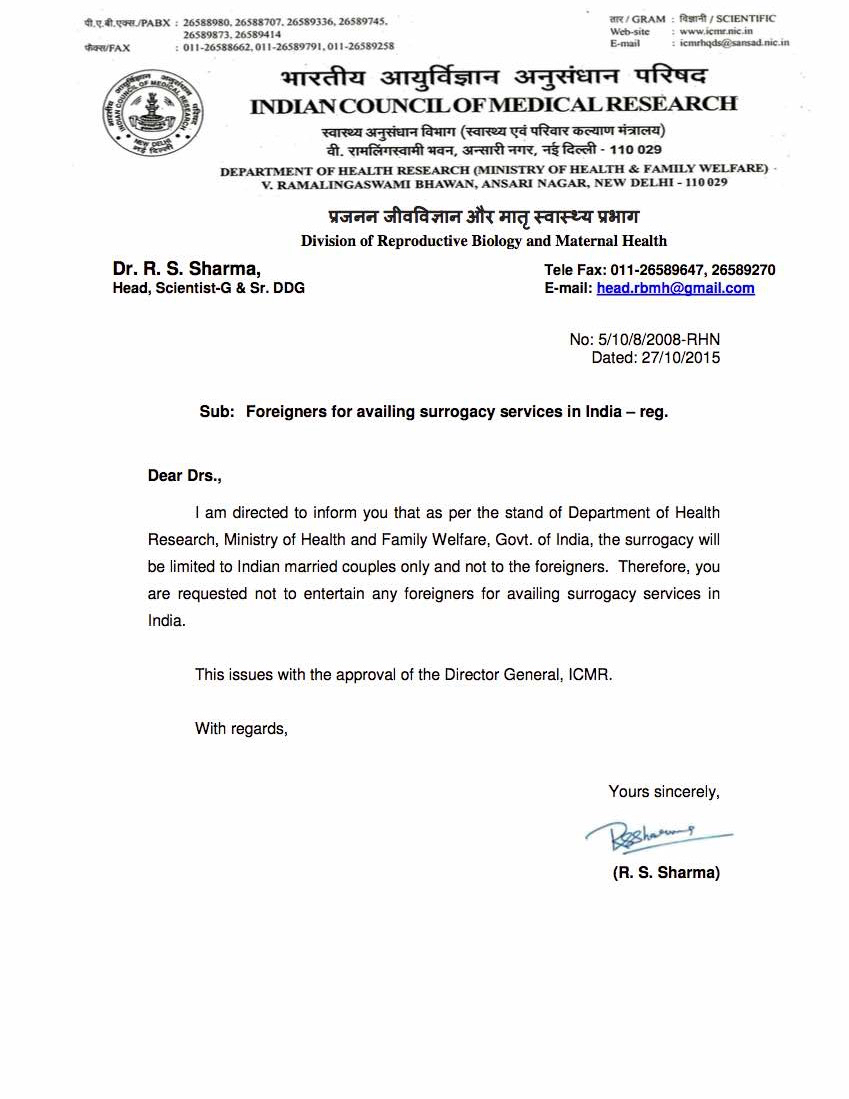 The Government also submitted to the Supreme Court that it reversed the Notification that allows free import of gametes into India from foreign nations except for research purposes although no specific notification is found to that effect.

The Government made the above representations to Supreme Court in the hearing of Public Interest Litigation (PIL) filed by Advocate Jayashree Wad by impleading herself in the Jan Balaz Case (German Couple’s Case). In the last hearing of the same case about 2 weeks back, the Supreme Court had asked the Government to come out with clarity as to how it plans to regulate commercial surrogacy and had asked 14 specific questions on the subject-matter. I am informed by my sources that the Supreme Court expressed its displeasure in the manner by which the Government had careless and hurriedly decided the matter that is subjudice. The case is to be listed next month.

In my personal view, the stand taken by the Government is rather rash and unwary.

Government moves on a matter that is subjudice

The foremost concern is that the Supreme Court was considering various issues related to commercial surrogacy for both domestic and international couples. The Supreme Court had infact gone deep into the matter, trying to ascertain what are the rights of the donors, biological parents and the surrogate mothers and had posed 14 specific questions on the matter asking for the Government’s view on the same. The Government had tried to clear avoid the issue on hand and moved to stop commercial surrogacy for foreigners as an escape route, rather than addressing the issue. The Government even failed to answer the fourteen questions that were posed by the Supreme Court.

The Government had asked for opinion/comments on the Assisted Reproductive Technology Bill, 2014 which has been published by the Government. The first reaction of the stake-holders was that the allocated time of 45 day to submit the opinion or the comments was too less to read into the intricacies of the issue on hand. Now, the Government has made the whole consultative process a mockery by disallowing commercial surrogacy for foreign nationals. It is sad to see that the Government has least regard to the opinion the public on the matter of Third-Party Reproduction by decisions that significantly affects the lives of many childless couple.

What is the state of the embryos that are already in India?

The Government had submitted to the Supreme Court that the Notification that allowed import of human embryos has been reversed and that human embryos can no longer be imported into India, except for the purposes of research. With this move, the Government stomps on the hope of several families who are in the process of surrogacy. The Indian Ministry of Home Affairs had been issuing “medical visa for surrogacy” even immediately prior to this decision on 27th October 2015. Several foreign couples are in India with valid medical visa at the moment in the process of the surrogacy arrangement. What is the state of the parents who are in the process of surrogacy? What is the status of the embryos that are already in India waiting to be transferred? The Government has a lot on its head to answer now.