A Case of Lesbian Parenting Conflict in Nevada 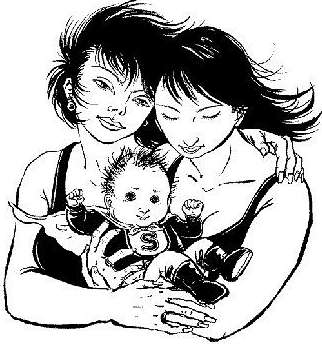 The mother of a four-year old girl is yet to be decided in Las Vegas, U.S. for want of Domestic Partnership arrangements and Parental contract as her parents are Gay Partners. In the Nevada Law itself there is no provision for same sex co-parenting agreements, especially for unmarried person or persons or persons who have not entered into valid domestic partnership arrangements.

Sha’Kayla St.Mary and Veronica Damon are gay partners. The two were Corrections Officers at a state women’s prison in North Las Vegas and began to have intimate relationship. During the course of their relationship, they decided to go through the process of surrogacy for having a child. They sought the help of an Infertility Clinic.  St. Mary underwent in vitro fertilization. The embryo was created from the eggs contributed by Damon, which was fertilized with the sperm of an anonymous sperm donor.  Veronica was designated as Biological Parent and St.Mary was termed as “Non-biological parent”. The child was born in June 2008. They both have signed a co-parenting agreement.

After the birth of the child the relationship between the two partners deteriorated and they got separated.  A conflict arose between the two for claiming motherhood for the child, which lead to a litigation.   After their separation, during October 2009, Nevada Law had been amended in which the marriage is defined between a man and a woman.    The said law has no provision with regard to position of gay couple, especially partners without contractual agreement.

As there are no valid domestic partnership arrangements between the two partners, just decision has not yet been arrived at. The counsel for the biological mother contends that the fact of having given birth to a child does not confer parental rights. She further pointed out to the County Court that Damon was the sole legal parent of the girl, based on which the Judge ruled that the Gestational Mother, St. Mary could seek visitation rights of the child.  It is the contention of her lawyer that under State Law a woman gains parental rights to whom she gives birth.  But to substantiate her contention she has to justify many of the concerns raised by the State High Court, which are yet to be addressed by the Trial Court.  Though several judges are favoring to refer back to the Family Court for finding out the facts of the case and to give justice to the two partners.  But, the main concern is that no guardian has been appointed for the child, who is not in a stage to raise her voice for justice.